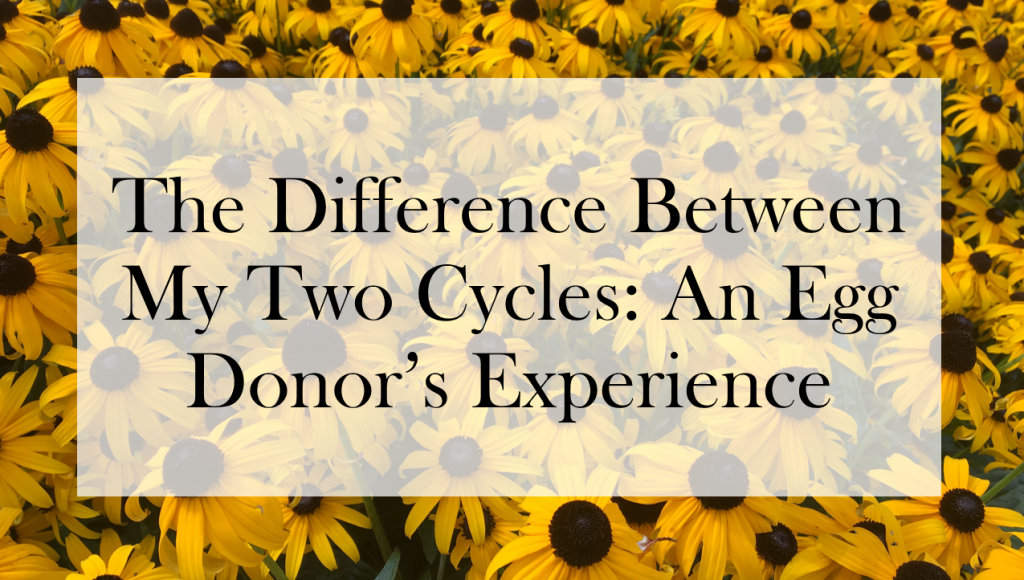 At Circle, we receive many questions about the egg donation process. Becoming an egg donor involves applying, matching, psychological and medical screening, contracts, medications, monitoring appointments, retrieval, and compensation. Even with this general process, every egg donor cycle is unique. As a two-time egg donor, here’s a back-to-back comparison of my experiences.

My first Intended Parents (IPs) were a same-sex couple; they were also working with a gestational surrogate to have their first child. My second IPs were a heterosexual couple, who already had one child. In this case, the IPs were not using a gestational surrogate, and the intended mother planned to carry the baby herself. Both donations were anonymous, but I did receive non-identifying letters from the IPs through the agency.

It took longer than I expected to be selected for my first egg donation; this is relatively common as many IPs are looking for proven and experienced donors. After my first donation, the process moved much faster and I was matched with my second IPs about one month after my first retrieval.

Since I had recently donated, I only had to complete a portion of the medical screening, because some of my previous results were still valid. With my second donation, I had a tight timeline to complete the retrieval. The only thing that did not move faster for the second donation was the legal contract, but ultimately everything was completed within my requested time frame.

For my first cycle, one of the reasons the IPs selected me as their donor was because I lived close to their clinic, so it saved them money on the travel costs. I was able to attend appointments in the morning before work. For weekend appointments, I only traveled about 30 minutes because the clinic was close by. I was able to work throughout the entire cycle, and I only took off the day of the retrieval. While I was physically able to move around the day after the retrieval, I chose to work from home that day to give my body some extra rest.

For my second cycle, the IP’s clinic was in Seattle, Washington. I live in Boston so this travel was much more extensive than my first cycle. The IPs covered all of my travel costs, and they even would have covered the costs of a companion to travel with me, but I chose to travel by myself.  I was in Seattle for about one week, and I returned home two days after the retrieval.

For my first cycle,  I was nervous about the injections, not knowing the exact date of the retrieval ahead of time (I was only given estimated dates, which is typical), and how the recovery would be after the retrieval. With my second cycle, I felt like a pro! While the second cycle was different than the first, I still felt more confident because I had already gone through the process.