Yesterday, the Supreme Court heard arguments in what will likely be the most important marriage equality case in U.S. history. 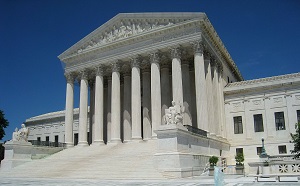 It is especially exciting for my husband Cliff and me, and for all of us at Circle, as longtime supporters of the Gay & Lesbian Advocates and Defenders (GLAD). We’re thrilled to see the organization that helped make our home state of Massachusetts the first in the nation to recognize same-sex marriage continue to lead the charge for marriage equality nationwide. If anyone can do this, it’s Mary Bonauto and the GLAD team.

In my mind, the core of the Court’s last same-sex marriage decision in United States v. Windsor was its belief that it means something to children to have their parents’ relationships recognized. In that opinion, which struck down the Defense of Marriage Act, the Court stated:

“The law in question makes it even more difficult for the children to understand the integrity and closeness of their own family and its concord with other families in their community and in their daily lives.” 570 U. S. ____ (2013) (Docket No. 12-307)

From my own personal experience, I can say that it was tremendously important to my kids that my husband and I were married. It means something to a child to be the result of a recognized, committed relationship.

When you’re married, you gain the support of the community – you have a set of laws that protect your relationship and that encourages you to remain connected to each other. Society supports that law, and with that comes a feeling of security, which means people feel more comfortable about venturing out and having children. For many people, they gain confidence in having a family when they have an established, recognized relationship.

At the moment, surrogacy is possible in 90% of states, but the problem is that it is only truly possible for heterosexual couples to pursue surrogacy unencumbered in those states. Gay couples will find that states like Texas continue to refuse to name same-sex couples on birth certificates. They will find that they need to complete additional legal work in their home states in order to secure their parental rights – just because they are same-sex couples. A nationwide marriage equality ruling would change that.

We’ve seen positive changes happen already in Virginia, Utah, Florida, and North Carolina. States, where same-sex marriage has recently become legal, with surrogacy statutes that require that intended parents be married (originally drafted with this language as a way to prevent gay couples from having children through surrogacy in their states), are now treating same-sex couples the same way as heterosexual couples – granting pre-birth orders, parentage actions, and amending birth certificates. A positive Supreme Court decision would remove the remaining obstacles to same-sex couples who continue to face discrimination when it comes to surrogacy policy in a number of states.

Nationwide marriage equality is not just an advance for same-sex couples and their children. It represents a step in the direction of a society that recognizes that families come in many shapes and sizes. That means a family formed through surrogacy or egg donation deserves just as much protection as any other family.